Here I was, innocently responding to reader email when I realized that it’s been 100 years this month since Ernest Rutherford did (or rather published) his famous scattering experiment. For those of you who’ve forgotten, the idea was that Rutherford shot alpha particles (now known, in a far less sci-fi sounding way as helium nuclei) at a thin gold foil. The thought was that charges were suspended more or less uniformly — like plums in a pudding, to re-use an over-used and not very current phrase — over much of the volume of the foil. If the plum pudding model were correct, the alpha particles wouldn’t have been deflected much at all. Instead, some small fraction of them bounced back. 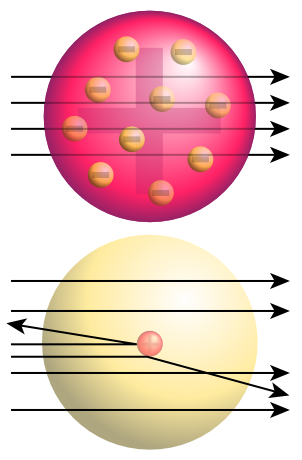 (The top image is what people thought prior to Rutherford, and the bottom is what he saw.)

It was quite the most incredible event that has ever happened to me in my life. It was almost as incredible as if you fired a 15-inch shell at a piece of tissue paper and it came back and hit you.

What this proved was that the charge in the atoms — and something like 99.95% of their mass — were confined to a miniscule region, about 1/100,000th of the total radius. To put things in perspective, it’s as though all of the mass of the earth were confined to a region the size of an office building, and all of the rest was ethereal nothingness (well, the electron, actually, which is 1/2000th the mass of a proton).

If you’d like to take a look at the original paper, here you go!

This entry was posted in Uncategorized and tagged physics. Bookmark the permalink.